The new French Ambassador to Nigeria, Her Excellency Mrs. Emmanuelle BLATMANN, has visited The Petroleum Technology Development Fund (PTDF) to familiarize herself with the PTDF Management and also consolidate on the existing educational partnership between the Fund and France in the development of indigenous manpower for the Oil, Gas and Energy Sectors in Nigeria. She said that she was in PTDF to introduce herself as the new French Envoy in Nigeria and to improve on the relationship between the two countries in the educational sector. “I came to PTDF to introduce myself and pay a courtesy call to the Management team. PTDF is indeed one of our major partners in higher education, mobility exchange partnership and academic sector. Education and Energy are key to us, we have a lot of know-how, and we know that PTDF is committed to meeting the challenges in this sector.“

The Envoy who led the Embassy’s high-powered delegation on a courtesy visit on the Executive Secretary, PTDF, Dr Bello Aliyu Gusau, also disclosed the French Government’s willingness to ensure a smooth take-off of the College of Petroleum and Energy Studies, Kaduna, developed by the PTDF. 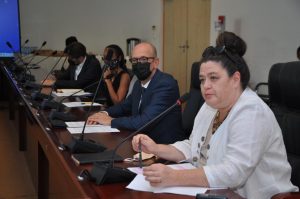 The Ambassador who described the PTDF as a reliable ally commended the quality of scholars sent by the PTDF to France, which according to her is not only from the way they distinguished themselves as the most organized and hardworking students received by France in recent history but also by their incredible success stories which propelled other France universities to be asking for more Nigerian students.

She outlined joint research opportunities in Petroleum Engineering, Geology, Environmental and Energy studies as potential collaborative areas and other expertise and technological areas that may be fashioned out between the Fund and Campus France, one of PTDF’s main joint partners in this respect. 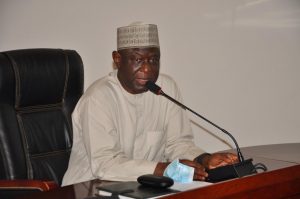 In his remark, the Executive Secretary, PTDF, Dr Bello Aliyu Gusau, thanked the Envoy for the visit and expressed the Fund’s readiness to collaborate with all institutions ready to support the implementation of the Fund’s mandate, particularly in Education, Training, and in Research and Development.

He stated that since 2017 when the Fund consummated a strategic relationship with France and other strategic partners, it has been a worthwhile effort that has grown beyond expectation and has led to an increased interest from candidates wishing to attend various French universities. This, he said, encourages the PTDF to consider doubling the number of its scholars going to the France universities on scholarships.

“In the past, we had one-way traffic to the UK, but by the time we established that partnership with France, we realized that there are many opportunities we have been missing, and France’s example is one of those we can use. So far, the number of students is growing; we keep receiving more interest, and this year, we are hoping to have more students heading to various French universities. The reports we are getting is an excellent report of the students and the quality of training they are receiving in different universities in France“. 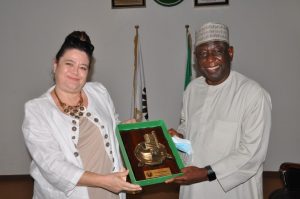 The Executive Secretary, who thanked the French Government and the Campus France for their efforts and how they take care of the PTDF scholars, also appreciated their interest in the take-off of the PTDF’s proposed University and Centre of Excellence Kaduna. He said the Fund has reached an advanced stage in the process and will spare no effort to ensure its early take-off.

The Fund has in 2019 formalized its Partnership engagement with Campus France, a major training Consortium promoting higher education and research in over 300 French universities and educational institutions. The engagement was firmed up by a Memorandum of Understanding (MoU) between the PTDF and Campus France and endorsed by the Executive Secretary, PTDF, Dr Bello Aliyu Gusau, on behalf of PTDF and Joaquim PEDRAZA on behalf of Campus France, at the PTDF House, Abuja. The MoU aimed to facilitate Nigerian students’ training in various French universities and educational institutions in relevant areas of Science, Technology, Engineering, ICT, Renewable Energy and other oil and gas-related courses under the PTDF Overseas Scholarship Scheme.